8 Uses of COMSOL Multiphysics® in the Biomedical Industry

Biomedical applications are often multiphysics in nature, from mechanical heart pump implants to vaccine storage devices to hematology analyzers. Therefore, multiphysics simulation can help revolutionize the way biomedical devices and processes are designed and analyzed. Here, we share 8 real-world examples of how engineers and researchers in the biomedical industry are using the COMSOL Multiphysics® software to advance their innovative, life-saving designs.

Heart failure, or congestive heart failure, affects more than 6 million adults in the United States alone. This common disease occurs when the heart does not pump enough blood and oxygen throughout the body. One way to help alleviate heart failure is with a left ventricular assist device (LVAD), a mechanical pump that provides circulatory support when implanted in the chest. LVADs are often referred to as a “bridge to transplant”, as they are typically used to treat patients who are waiting for a heart transplant. However, they can also be used as a long-term treatment option for patients who are unable to receive a heart transplant due to underlying medical conditions.

As expected, LVADs are often complex in design. They need to be:

To design an LVAD that possesses all of these qualities, researchers at Abbott Laboratories used simulation. For example, they used COMSOL Multiphysics to help design the LVAD’s centrifugal pump. To prevent blood clotting in and around the pump (a common challenge when designing LVADs), the researchers opted to incorporate a magnetically levitated rotor in the LVAD’s design. Using the software, the researchers were able to model and analyze the rotor and turbulent flow in the LVAD. 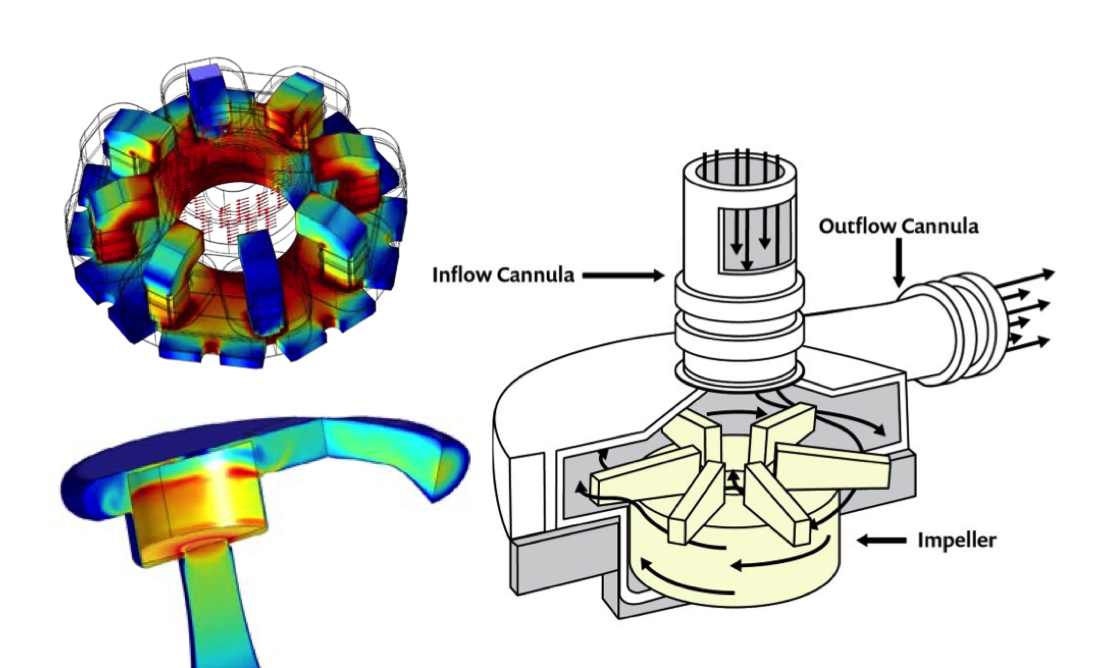 In addition, the researchers performed a mechanical impact analysis of the LVAD’s controller to study its resilience. The controller helps power, control, and monitor the performance of the LVAD.

“I use COMSOL Multiphysics every day, from proof-of-concept models to quite sophisticated simulations featuring detailed CAD geometries and coupled physics. I work with some complex models for months before I have taken all of the information I want from them.”

According to the Centers for Disease Control and Prevention (CDC), vaccine storage plays a major role in mitigating the spread of common preventable diseases and illnesses. Unfortunately, many vaccines spoil and go to waste due to their strict temperature requirements.

As part of the Global Good program, innovators at Intellectual Ventures (IV) designed a passive vaccine storage device (PVSD) to safely transport vaccines to every part of the world. When in use, it’s designed to keep vaccines between the temperatures of 0°C and 10°C with a single batch of ice. Its housing provides multilayer insulation, which consists of thin layers of reflective aluminum, a low-conductivity space, and a nonconducting vacuum space. The PVSD does not require external power to function. 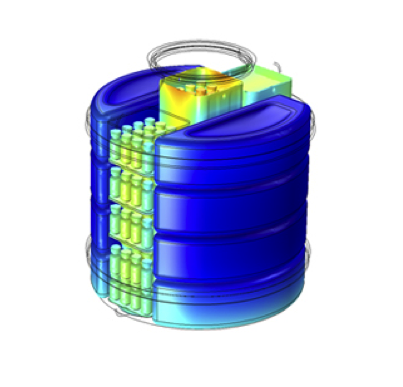 A thermal simulation of a PVSD in COMSOL Multiphysics.

During its design phase, the researchers tested the performance of several PVSD prototypes in an environmental chamber with similar temperatures to those found in Sub-Saharan Africa. To optimize the design of their PVSD system, prior to building prototypes, the team used COMSOL Multiphysics and a variety of its add-on modules, including the Heat Transfer Module and Molecular Flow Module.

Using experimentation and simulation, the team was able to design an easy-to-transport PVSD that keeps vaccines cold for up to an entire month, allowing for the safe transportation of vaccines to all areas of the world — even in places with limited or no electricity.

In 2020, liver cancer was the third most common cause of cancer-related deaths worldwide, accounting for more than 800,000 lives lost. This disease is sometimes treated with ablation, a minimally invasive treatment that can destroy liver tumors without removing them. Two types of ablation for treating liver cancer include:

A common challenge faced by many medical professionals administering such ablation treatments is that they don’t have access to real-time feedback on the effectiveness of these procedures. To address this concern, a team of researchers at Medtronic, a leading developer of both RF and MW ablation technologies, used simulation to design new ablation probes with enhanced predictability and effectiveness. In their work, the team used COMSOL Multiphysics and the add-on RF Module to optimize the probes’ emitting and receiving properties.

As we age, it becomes increasingly difficult for our eyes to focus on close-up objects. This condition, known as presbyopia, affects most people in the world by age 65. The main cause of presbyopia is the change in shape of the crystalline lens, a tiny structure inside the eye. In our youth, this lens is thin and flexible, but over time it gradually becomes thicker and less flexible. When uncorrected, presbyopia is the most common cause of visual impairment.

This condition can be alleviated through the use of eyeglasses, contact lenses, or a simple magnifying glass. A more intensive form of treatment is refractive surgery. However, all of these options come with their own drawbacks and limitations. 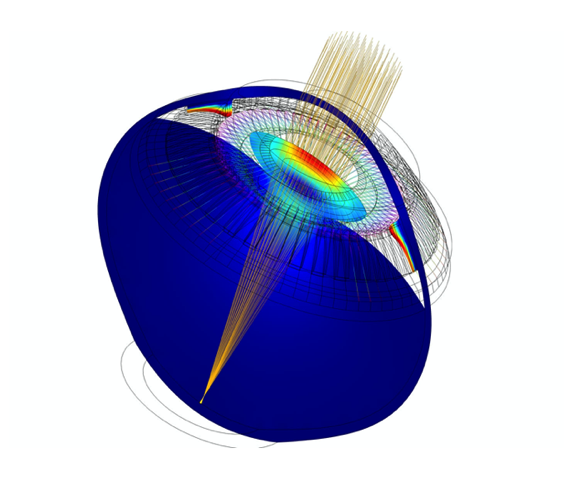 A model of the human eye used to help study presbyopia.

A team of researchers at the Cross Cancer Institute in Canada designed an innovative device that can image and treat cancer cells within the human body. The device, known as the Linac-MR, brings together a linear particle accelerator (Linac) and magnetic resonance image (MRI) into one system. It’s designed to target and treat any tumor, moving or not, and avoid damaging healthy tissue that surrounds the tumor site.

To optimize the design of this hybrid device, the researchers needed to analyze the physical phenomena that can prevent a Linac-MR from performing optimally. To do so, the researchers turned to multiphysics simulation… 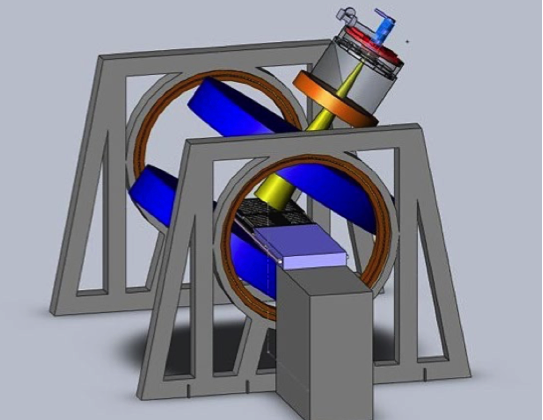 Configuration of the Linac-MR system.

One of the earliest simulations that the team performed was to determine the optimal size of a steel shielding plate. This plate would be used in the Linac-MR to protect the Linac from the MRI’s magnetic fields. Using COMSOL Multiphysics, they designed an optimized shield with a radius of 30 cm and thickness of 6 cm — one third the size of its original design.

In addition, the researchers wanted to design a Linac-MR that generates a 10-megaelectronvolt (MeV) electron beam. This would enable the system to treat a wide variety of cancer types. Originally, they estimated that the Linac would need a 70 cm waveguide for the system to generate 10 MeV. Using simulation, they learned that a 30 cm waveguide would suffice. By reducing the waveguide’s length, the researchers could construct a smaller room to house the Linac-MR, saving them time and money in the process.

It is of utmost importance that laboratory tests, such as hematology analysis, are designed with absolute accuracy, as these tests influence up to 70 percent of today’s medical decisions.

At HORIBA Medical, a worldwide supplier of medical diagnostic equipment, hematology and clinical chemistry equipment are designed with the following criteria in mind: 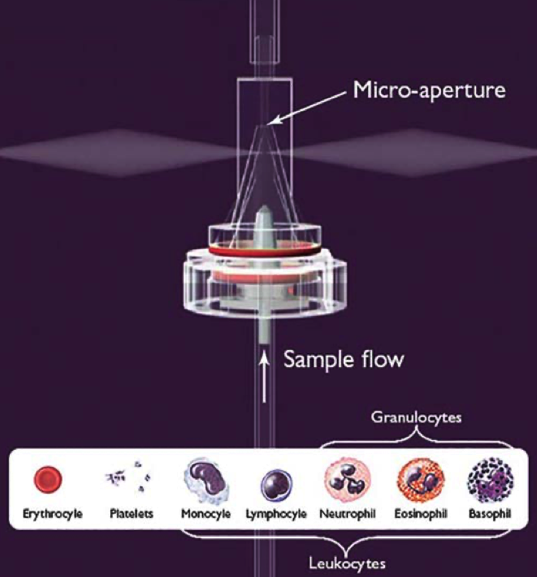 An illustration of the aperture–electrode system in the ABX Pentra® Series Analyzers.

For example, using simulation, HORIBA Medical was able to enhance the micro aperture–electrode system in the Pentra® Series, one of their most advanced hematology analyzers. Using COMSOL Multiphysics, they analyzed a variety of complex physical processes that occur within this system, including fluid velocity, pressure drop through the aperture, heat transfer, and electric fields.

“Since this is a very small system, it is very difficult to take any measurements experimentally. Simulation allows us to improve processes that are inaccessible with just physical prototypes.”

Researchers at The Technology Partnership (TTP plc) designed a microfluidic cell sorting device that can be used to help treat cancer and a variety of other diseases. Their device, the vortex-actuated cell sorter (VACS), includes an input channel and is designed to sort biological cells into two output channels:

Components of the vortex-actuated cell sorter.

According to the TTP team, multiphysics simulation was needed throughout the design of the VACS. For example, using a fluid dynamics model, they simulated and analyzed the effect of the device’s thermal vapor bubble technology. By doing so, the team was able to quickly build a working prototype of the VACS, one of the smallest cell sorters in the world. Simulation also helped to validate their design.

Coronary artery stenosis occurs when arteries in the heart become blocked by plaque buildup. Patients dealing with this condition may experience shortness of breath, chest pain, lightheadedness, and more.

To treat this condition, medical professionals sometimes use a small metal stent to hold a blocked artery open. However, tissue can grow over the stent, renarrowing the artery in the process. One way to help prevent this excess tissue growth is to use drug-eluting stents, which are coated in medicine and designed to reduce cell proliferation in the artery. To better understand how these stents work, a team of engineers at Boston Scientific, an innovative developer of medical devices, used multiphysics simulation.

Read more about the 8 examples described here and 4 additional ones in our special edition of COMSOL News for the biomedical industry.

2 Video Discussions on Multiphysics Simulation of Optics and Photonics

The Science Behind Cooking Caramel

Which Study Type Should I Use for My Electrothermal Analysis?