How to Link COMSOL Graphics to Microsoft® PowerPoint® 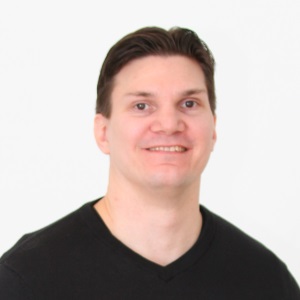 Do you create images with the COMSOL Multiphysics® software for Microsoft® PowerPoint® presentations? If so, you might need to update these images from time to time — meaning you have to create entirely new images and replace them in your presentation. This process can be dull and time consuming, but there is good news: With the COMSOL interface for PowerPoint®, image references can be handled and updated in a flash!

The COMSOL Interface for Microsoft® PowerPoint®

Once the COMSOL interface for PowerPoint® is installed with the COMSOL installer, it will provide ribbon toolbars to handle and update generated COMSOL Multiphysics® linked images within PowerPoint®. When an image requires an update, whether because of recomputed results in a model, a changed plot title, or the font size needs to be increased after rescaling a picture in a slide, it can be time consuming and require a lot of manual tweaking. However, as of COMSOL Multiphysics version 5.5, there is a much easier and quicker way to carry out these tasks with the ribbon interface.

With the COMSOL interface for PowerPoint®, linked images can be created in the COMSOL Desktop® and inserted into an open PowerPoint® application. A linked image contains a reference to its source model file and feature node, and this reference is stored with the saved PowerPoint® presentation so that the image can be updated on demand, with or without having the COMSOL Multiphysics® window open. With the image reference, the different image view and layout settings are also stored. The view settings can also be stored and locked, or updated to the current view when desired.

Image references can be created from different Model Builder nodes, such as:

A linked image is generated for PowerPoint® with the Image Snapshot window, which you can access from the Graphics toolbar by using the PowerPoint option in the Target settings. The current Image and Layout settings will be stored with the generated linked image, but can later be changed and updated within PowerPoint®. 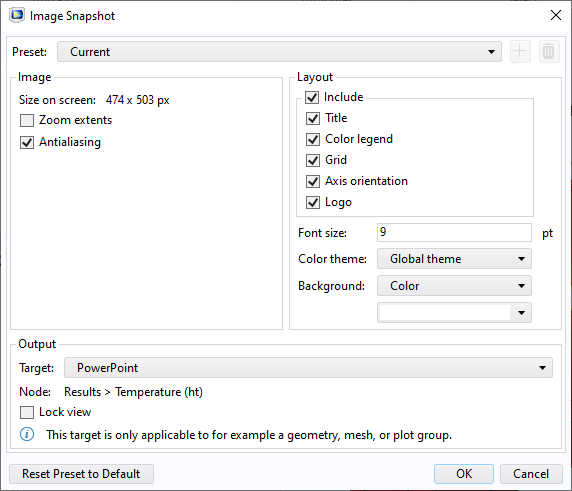 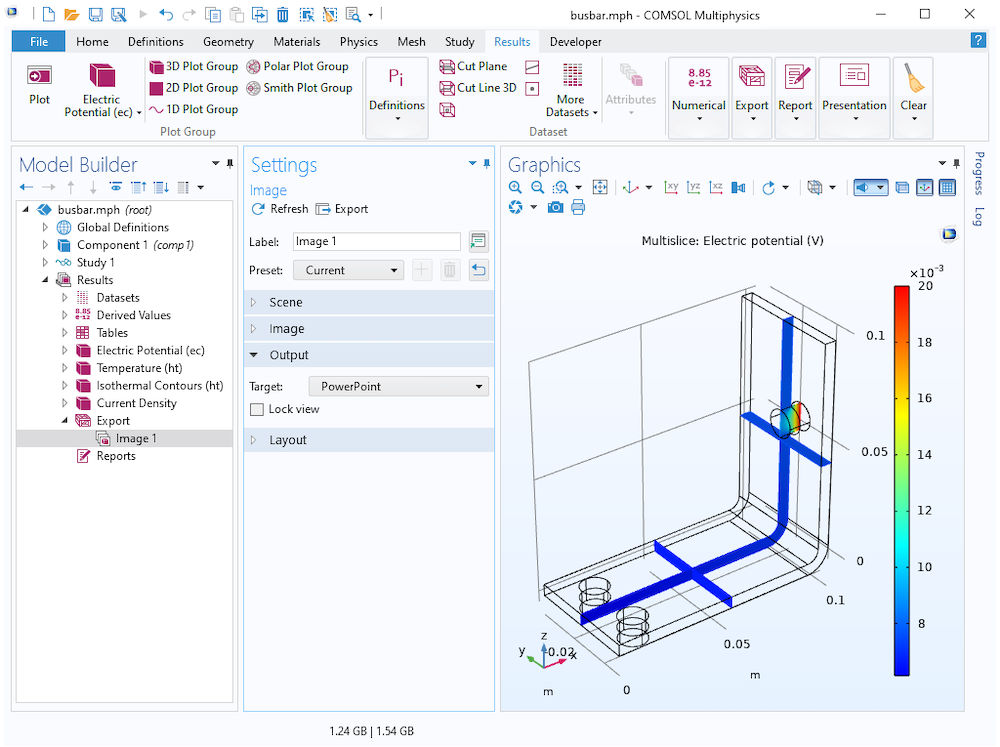 Once the image has been created for PowerPoint®, it is available to paste inside the open PowerPoint® application. This can be done a few different ways: 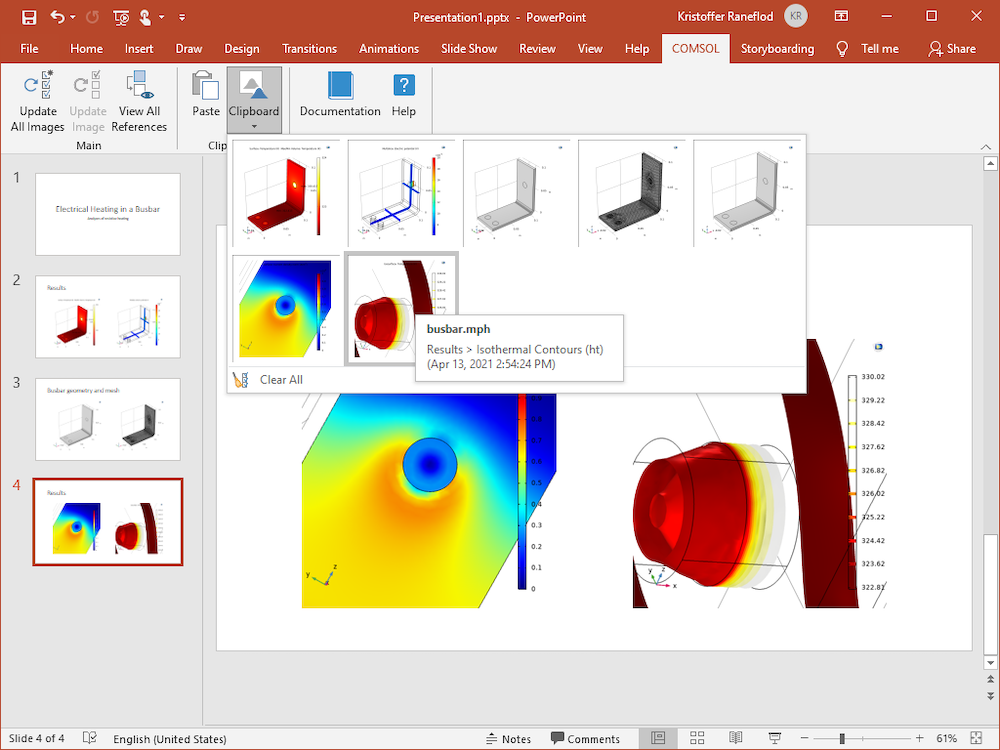 Updating Linked Images from Within PowerPoint® 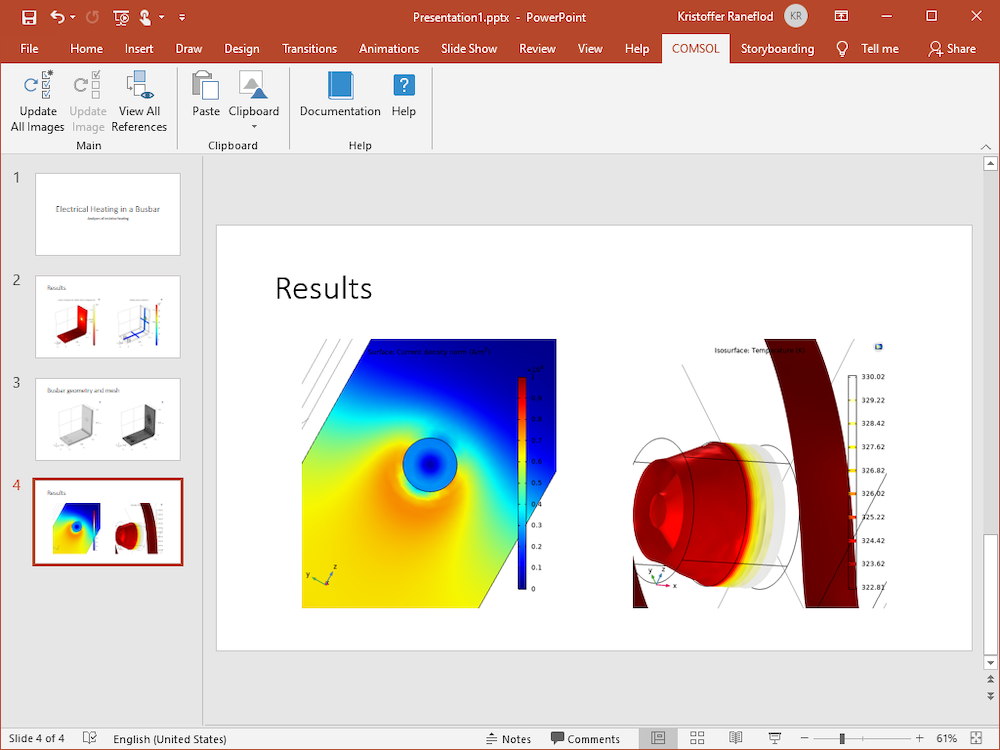 The linked images can be updated, with or without having the referenced model open inside the COMSOL Desktop. If the model is open in the COMSOL Desktop®, the image can be updated in an interactive way by iteratively making changes inside COMSOL Multiphysics® and updating inside PowerPoint®. For example, this can be nifty when finding the right view angle that fits into the design and layout of the PowerPoint® presentation, or trying out several graphics settings until you find the best fit for conveying the results with the presentation.

The COMSOL Image ribbon tab is available in PowerPoint® when a linked image is selected. The COMSOL Image tab contains controls for updating, locking, deleting, and changing the referenced model and node in the Main ribbon section. In the Image and Layout sections, the image and layout settings for the image can be changed. 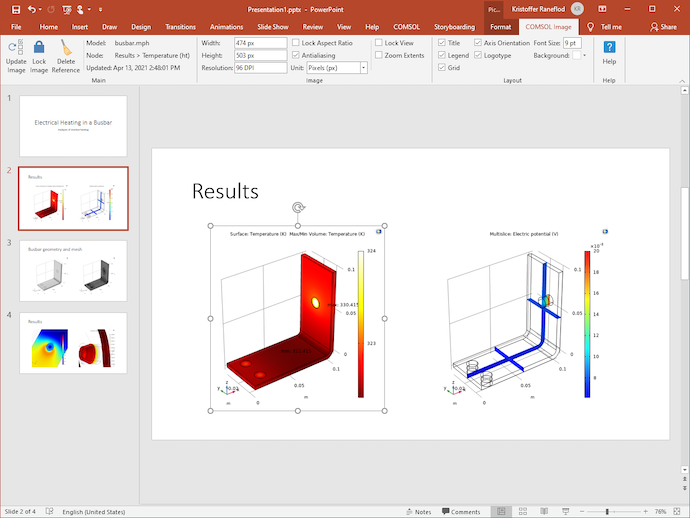 The image reference can also be edited or deleted, and the image can be updated or locked from the COMSOL menu available when a linked image is right-clicked. 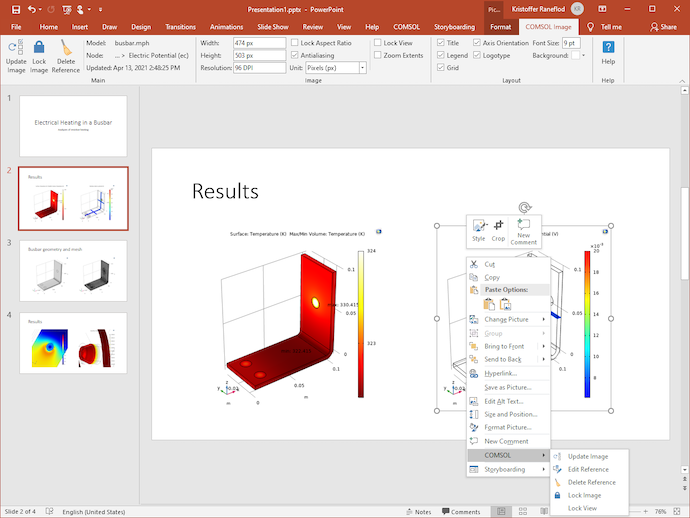 With the Edit Reference window, the referenced node or model can be changed for a linked image. The available nodes that can be referenced are shown in the model tree. For geometry and mesh sequences, it is possible to select the current build step and source node as well. 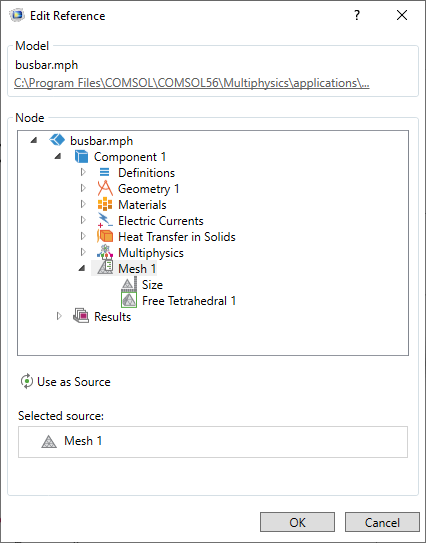 When a linked image has reached the desired state, it can be locked from updates with the Update All Images button. The view (for example, the zoom level and view angle) of a linked image can also be locked and preserved while other image and layout settings are changed and updated. 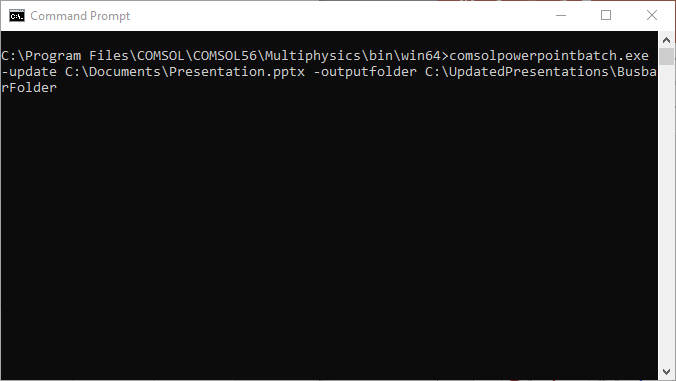 A fast way to duplicate, create, and edit linked images inside PowerPoint® is to select a linked image and then select the CTRL + C keyboard combination, followed by pressing CTRL + V one or multiple times. In this way, several unique linked image references are created with the same link settings as the copied image, but the link settings for each image can be changed and updated in order to quickly create references to other model nodes or with other image settings.

The COMSOL tab available on the PowerPoint® File menu contains References, Server, and Preferences tabs for administrating the references contained in the presentation and accessing server settings and interface preferences. 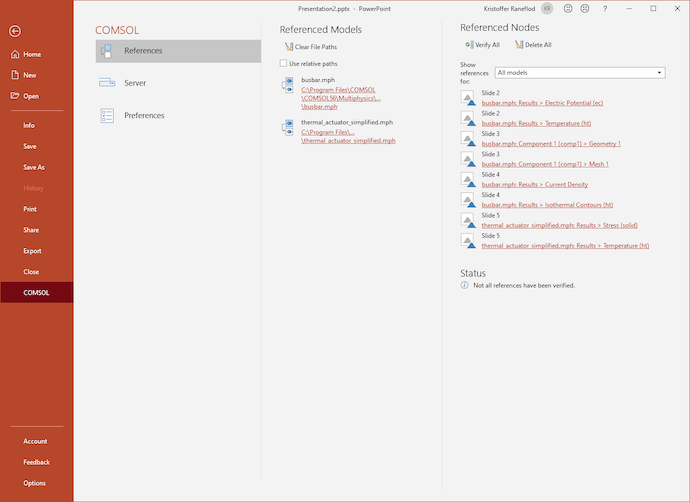 Microsoft and PowerPoint are either registered trademarks or trademarks of Microsoft Corporation in the United States and/or other countries.

How to Create High-Quality Model Images in COMSOL Multiphysics®

A step-by-step tutorial would be useful here. I tried to do what’s described in the article, but it seems like ordinary copy and paste- no linking back to COMSOL. The COMSOL tab in powerpoint doesn’t have everything shown in the examples or the video, for example “update images” and “clipboard” are grayed out. I don’t know if I’m doing something incorrect, or if my COMSOL installation is faulty.

Thank you for the feedback. If the “upate images” and “clipboard” are grayed out it is most likely because there are no linked images available. The linked image must be generated before it can be pasted into PowerPoint, and before it can be updated. It is also possible to copy an image without the link, and that might have happened in the case you are describing. Here are some step-by-step instructions for how a linked image can be created, pasted, and updated.

I hope these step-by-step instructions are clear and useful.

Thanks, I will try that.

I don’t know if it is the same problem you see, or if it is just related but here is a knowledgebase entry about the same graphics chip: https://www.comsol.com/support/knowledgebase/1285