Optimizing the Geometry of Optical Antennas with Genetic Algorithms

When thinking about natural selection, antennas are probably not the first thing that comes to mind. But with genetic algorithms, we can use the basic principles of natural selection to solve antenna optimization problems. For example, genetic algorithms enabled one research group to optimize the geometry of an optical antenna. They implemented their study by using LiveLink™ for MATLAB®, an add-on product to the COMSOL Multiphysics® software.

The Connection Between Natural Selection and Antenna Optimization

The idea behind natural selection is based on the fact that there is a great deal of variation in the world; even organisms of the same species differ from one another. The organisms with traits best suited for their environment are more likely to survive and pass those traits on to the next generation, which increases the occurrence of the beneficial traits in future generations. As a result, each successive generation becomes more adapted to their environment. That’s natural selection, in a nutshell. 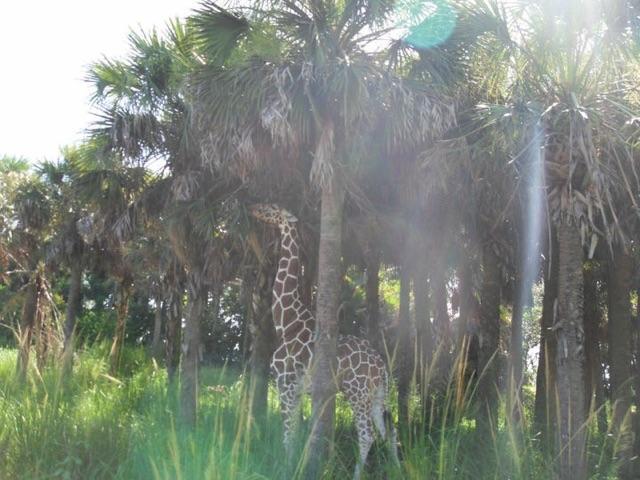 Over time, natural selection can result in the perpetuation of beneficial traits in a set of organisms, such as long necks in giraffes.

Genetic algorithms take the principles of natural selection and apply them to optimization problems. They study a set of “individuals” in an environment that has known values and characteristics. The studied population of individuals represents potential solutions to the problem. Appropriate mathematical functions define the fitness of each individual by representing how well adapted they are to the environment.

As with natural selection, using genetic algorithms is an iterative process, with the individuals in each “generation” potentially experiencing mutations and exchanging design characteristics. The process continues until the algorithms find an optimized solution for the particular environment or reach a maximum number of generations.

A research group from Universidad Autónoma de San Luis Potosí and Instituto Tecnológico de San Luis Potosí used genetic algorithms to improve the geometry of an optical antenna (nanoantenna). They wanted a design that optimally concentrates the electromagnetic field of a dipole nanoantenna at a 500-THz resonance frequency, which is a variable that depends on the dimensions of the nanostructure.

As an additional point of study, the team investigated if conventional RF macroscopic antenna geometries can be efficiently used for nanoscale optical frequency regimes. Here’s what they found out…

Optimizing Nanoantenna Designs with COMSOL Multiphysics® and LiveLink™ for MATLAB® 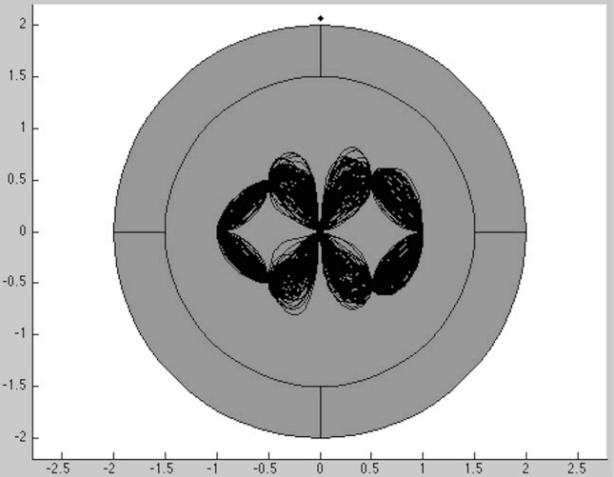 Whenever the algorithm yielded a design possibility, the researchers could automatically solve the electromagnetic equations, generate antenna response data for a given frequency, and evaluate the fitness function without having to interact with the graphical user interface in COMSOL Multiphysics. The optimized fitness function determined the minimum loss of the electromagnetic field at a frequency of 500 THz. These findings were then used in MATLAB® software to perform further genetic algorithm adjustments. This entire iterative loop was performed automatically, increasing the efficiency of the study. 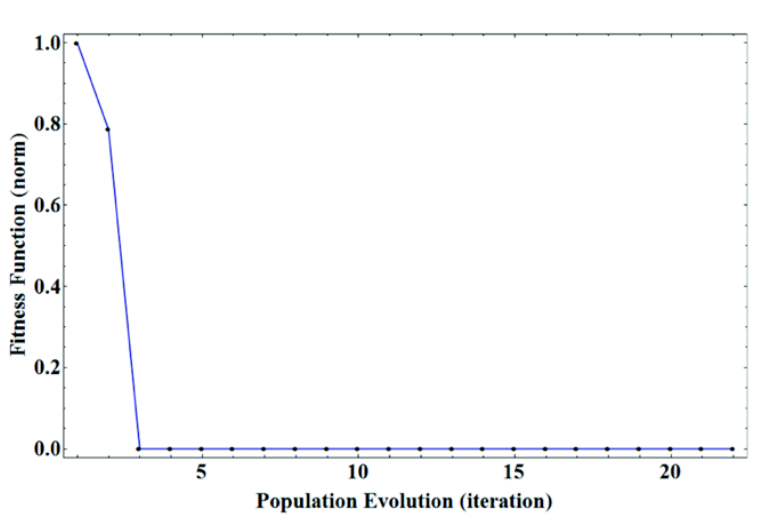 The trend toward a minimized electromagnetic field loss for each new generation. Image by R. Diaz de Leon-Zapata et al. and taken from their COMSOL Conference 2016 Boston paper.

The automatic process continued until the software reached convergent results for an improved antenna geometry. Using this procedure, the researchers obtained their final results at a lower computational cost and a shorter processing time than traditional analytical processes. 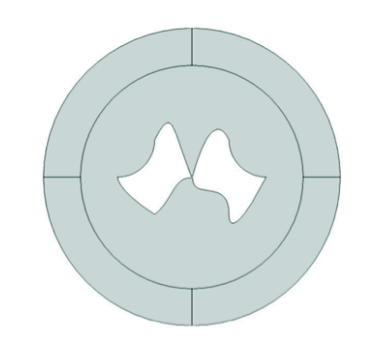 Comparison of the electromagnetic field concentrations for a classical dipole antenna (left), the first design iteration from the genetic algorithm (middle), and the final geometry (right). Image by R. Diaz de Leon-Zapata et al. and taken from their COMSOL Conference 2016 Boston paper.

To visualize this in a different way, the research group plotted the electromagnetic field concentration for a conventional dipole antenna and the finalized geometry over a range of frequencies. The comparison shows that while both geometries encompass the same effective area, the version created using the genetic algorithm represents an optimal concentration. Compared with previous studies, the final design also has an increased electromagnetic signal and bandwidth. 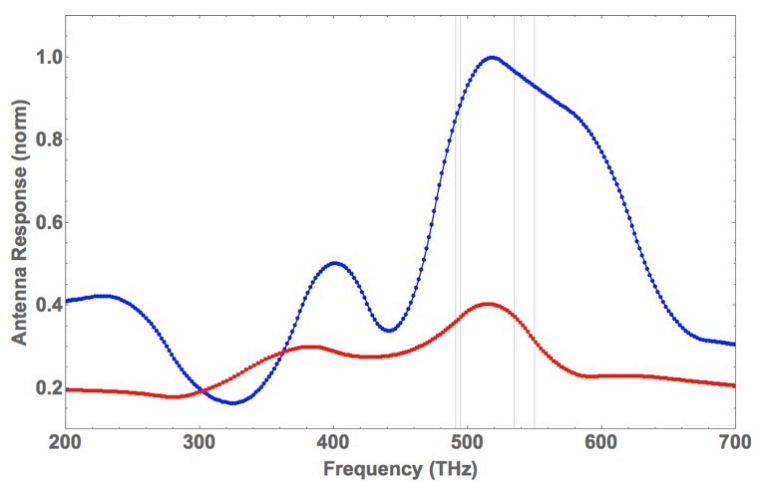 Comparison of the electromagnetic field concentration for a classical dipole geometry (red) and the geometry generated from the genetic algorithm (blue). Image by R. Diaz de Leon-Zapata et al. and taken from their COMSOL Conference 2016 Boston paper.

Using these findings, the researchers concluded that the genetic algorithm can enhance the maximum electromagnetic field concentration in the optical frequency regime. The team’s next step is to use the results of this analysis to study nanostructure fabrication and characterization, which could help foster the creation of renewable energy devices.

MATLAB is a registered trademark of The MathWorks, Inc. 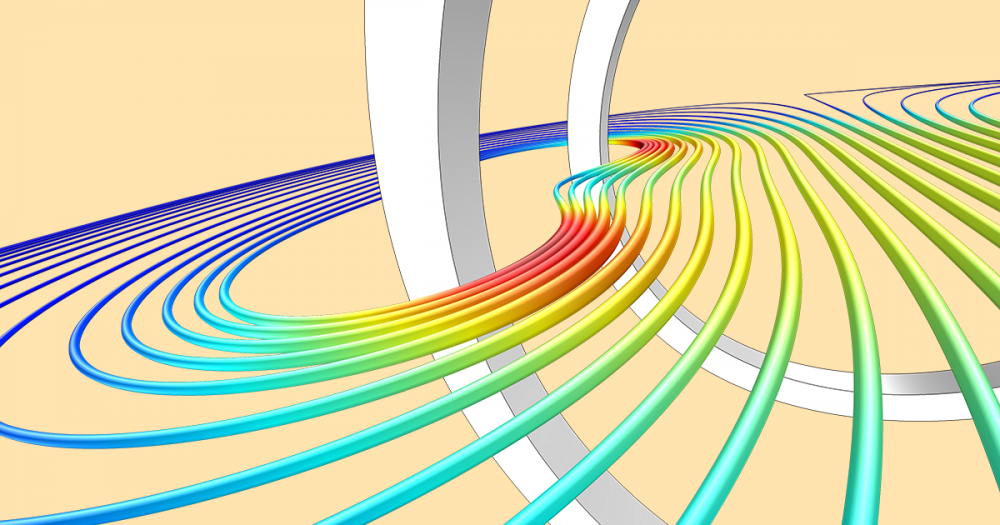 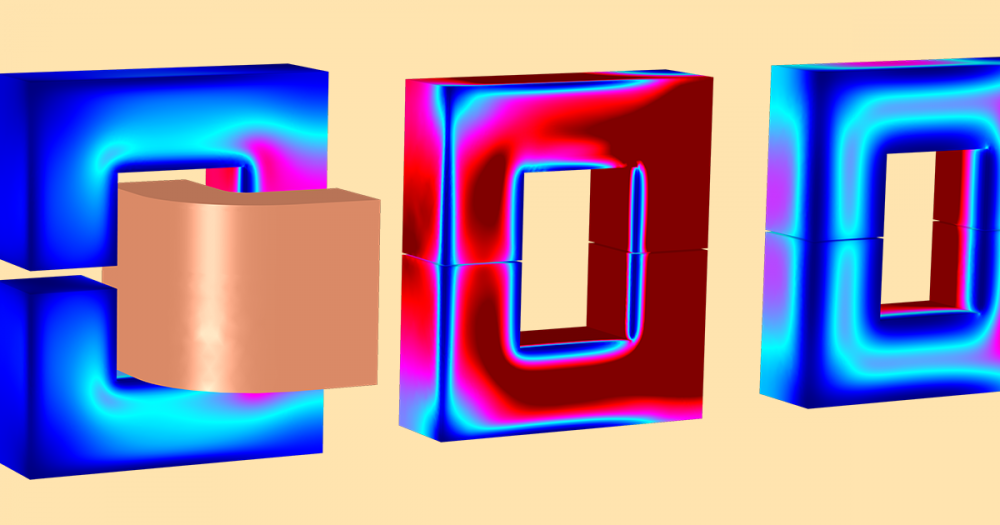 Analyze the Electrodynamics of a Magnetic Power Switch via Simulation