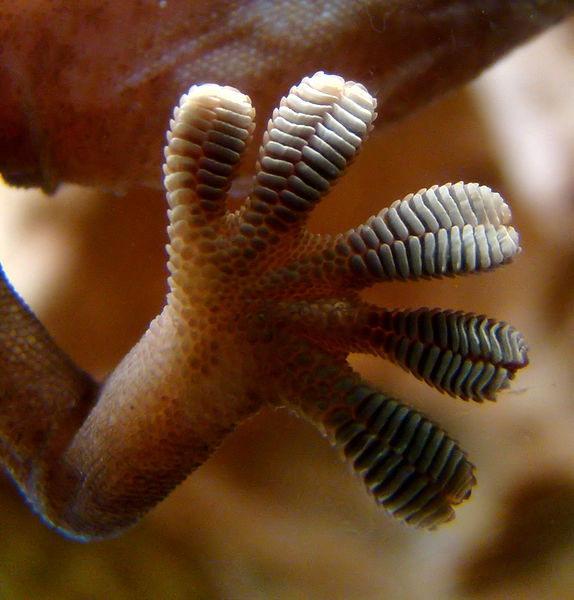 Stick a TV to the Wall Using Gecko Feet

Gecko lizards use dry adhesion forces to climb vertical and even backward-slanting walls. Yet, despite the strength they provide for holding their body to such walls, you can easily pluck them from their surface, and no residue is left behind. Imagine doing that with a TV.

I have just read a cool article about the University of Michigan’s solar car. Back when I was a young and hopeful engineering student in Australia , the World Solar Challenge really sparked my imagination. This is the race from the top of Australia (Darwin) to the bottom (Adelaide) across the desert where the cars are powered by solar energy, which is basically captured by solar cells on the car roofs.

As most skilled COMSOL users, I am sure you know that you are not limited to just selecting what is in our drop-down lists. Say that you have invented your own measure of structural stress. You want it to be equal to the quadratic mean of the Tresca and von Mises stresses. Go to Plot Parameters to find out what these predefined stresses are called (trescasmsld and misessmsld if you are modeling in 3D with the Structural Mechanics Module). Now […]

Multiphysics Conferences in Boston and Milan Draw More Than 700 Engineers, Researchers, and Scientists

BURLINGTON, MA (November 9, 2009) — More than 700 of the world’s top practitioners of multiphysics simulation recently gathered for the fifth annual COMSOL Conference in October. Complementary events were held in Boston and then Milan, Italy. The next stop for the annual world tour of this conference focused on multiphysics modeling and simulation for engineering and scientific research is Bangalore, India, November 13-14, 2009, followed by additional conferences in Shanghai, Beijing, Tokyo, and other locations.

This week I will talk about CAD import. Many times, the first task a new user of COMSOL is up to is to lay their hands on the CAD models of the design team. After all, COMSOL handles the analysis, which needs to be closely tied with the design process. Ideally, design and analysis is integrated in one single process. There are different ways to marry the CAD models with the analysis. File based import is maybe the most common […]