The Expression Operator node is used for evaluating arbitrary parameterized expressions. You can add multiple instances of this node to one model, with each node defining separate expressions to be used on or in different geometric entities such as domains or boundaries. In this blog post, we will look at how the Expression Operator works and how you can use it in your modeling projects when working with the COMSOL Multiphysics® software.

In the table below the Expression field, define the input arguments. Type the name of the argument in the Argument column and a unit to define its dimension in the Dimensions column; in the Argument type column, choose the Expression option (the default setting) or the Value option from the drop-down list. Passing an input argument by value means that it is evaluated in the context where the expression operator is called, before being inserted as a number into the operator expression. Arguments passes by expression are substituted directly into the operator expression. This can make a difference if the argument is passed on as an argument to a coupling operator that evaluates its arguments in a different context. For example, care must be taken when passing a spatial coordinate variable in an argument that is forwarded to an Integration coupling that is part of the expression operator’s definition.

Benefits of the Expression Operator

The Expression Operator can benefit a variety of modeling projects and scenarios. Learn how in the list below:

Example of the Expression Operator in Action

This example shows how an Expression Operator node can be used for the following two purposes:

In the example, a Solid Mechanics interface is only defined in the first (upper-right) quadrant of the model geometry, which is a unit circle. Two General Extrusion operators, yAxisMirror and xAxisMirror, provide mirror operations from a source to the destination for the x– and y-coordinates as –x and y and x and –y, respectively. An Expression Operator called doubleMirror is then defined using three Operator Contribution subnodes, each providing a double-mirror transformation in the second, third, and fourth circle quadrants as yAxisMirror(expr), xAxisMirror(yAxisMirror(expr)), and xAxisMirror(expr), respectively. The following image shows the settings for the Operator Contribution subnode for the third quadrant: 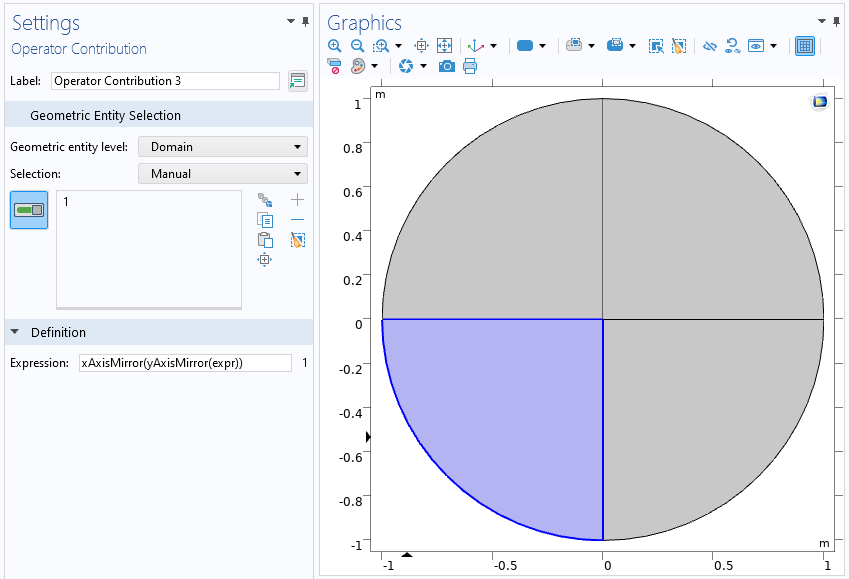 The definition of the Expression Operator in the third quadrant. 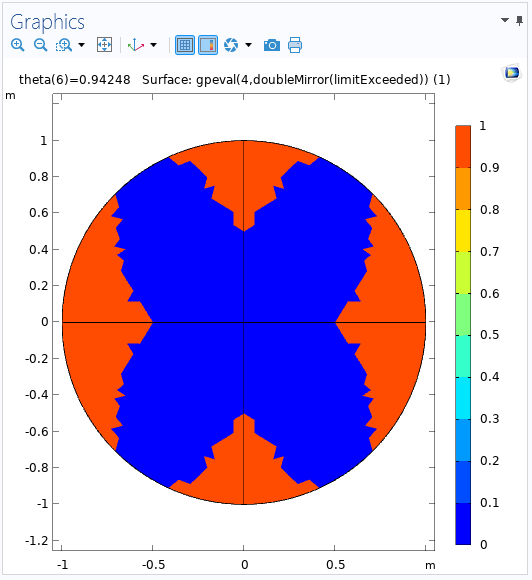 Plot of areas where a stress limit has been exceeded. The double mirror provided by an Expression Operator includes a solution in the entire circle.

Thanks to the Expression Operator, the solution computed for the first quadrant can be visualized as a double-mirror plot in the entire circle with just a compact expression. 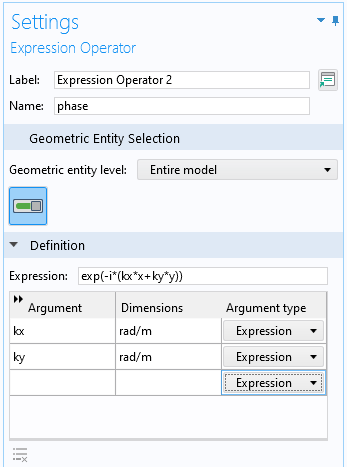 The Settings window for the phase Expression Operator with the two expression arguments.

The expression for the phase is the equivalent of the mathematical expression e^{-i(k_x \cdot x+k_y \cdot y) using COMSOL Multiphysics syntax.

You can use the phase Expression Operator in a surface plot to show the phase with different values of the arguments. The following plot shows the phase with kx set to 5 and ky set to 20: 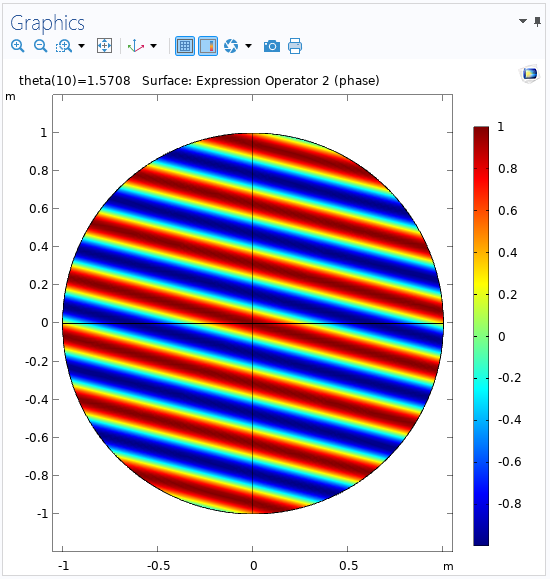 A surface plot showing the phase using an Expression Operator.

This blog post has explained what the Expression Operator node is and how you can use it to your advantage when modeling in COMSOL Multiphysics. We encourage you to practice using this feature to simplify and improve your COMSOL models. If you have any questions related to this topic, contact COMSOL via the button below.

Modeling the Spread of COVID-19 with COMSOL Multiphysics®

Can we get the sample mph file for this tutorial?

Hi Ruoyu, and thanks for your suggestion. We will make the example MPH-file available through a link from this blog post soon.