Wireless capsule endoscopy (WCE) is a less invasive alternative to conventional endoscopy. In WCE, a patient swallows a small capsule equipped with a camera, allowing a video of the gastrointestinal tract (GIT) to be captured for diagnostic analysis. To ensure an accurate diagnosis and that the location of interest is correctly identified, it is crucial that each video frame is correlated with the exact distance travelled by the capsule in the GIT. For this purpose, static magnetic localization is well-established, wherein a small cylindrical permanent magnet is embedded in the WCE capsule and the resulting magnetic flux density is measured by magnetic sensors arranged on the body surface of the patient. In this way, the position and orientation of the capsule can be reconstructed from the measured values. Since the magnetic flux density is static, the geomagnetic flux density interferes with this method. To prevent interference from the geomagnetic field, a novel differential localization method for the localization of capsule endoscopes was proposed. The Magnetic Fields, No Currents (mfnc) interface from the AC/DC module and a stationary study were chosen. First, the geometry was set up by creating a rectangular box with a size of 1400 × 1400 × 1400 mm³ as a sufficiently large computation domain. To represent the geomagnetic field, three static components of a magnetic flux density B were applied as boundary conditions to the six surfaces of the box. The box's magnetic permeability was set to 1, as the magnetic permeability of human tissue is approximately equal to that of air. Next, three x–y-working-planes were created for three ellipses (34 × 33 cm²), each of which was set at a distance of 10 cm from the others and included four points, representing 12 magnetic sensors. Subsequently, a cylinder with a diameter of 10 mm and length of 10 mm was modelled in the x-direction, with its center positioned at 60, 60, 60 mm. From mfnc, a Magnetic Flux Conversion was applied to the cylinder and the magnetization was set to 1160 kA/m. For the optimization of the meshing, an additional geometry was set around the three ellipses. Therefore, a fourth ellipse with a larger diameter was extruded. A parameter sweep was conducted to optimize the mesh. Since the B of a permanent magnet can be approximated with the dipole model, the simulated B was compared with the analytical B for the different mesh parameters. The three measured components of B at each of the 12 points were exported to MATLAB. As the three components of the geomagnetic field were equal at two opposite points on the ellipses, the geomagnetic field was cancelled out by subtracting the measured B of those points. By applying the Levenberg-Marquardt-Algorithm on the COMSOL data in MATLAB, the magnet's position and orientation could be reconstructed with position and orientation errors of significantly below 0.1 mm and 0.1°, respectively. Therefore, the interference of the geomagnetic field on the proposed differential method was eliminated. 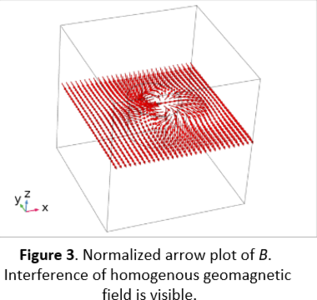