Since my wife and I have become happy parents to two children, our walking time has multiplied, as they fall asleep best in their buggies. Fortunately, we live right next to the largest park in our hometown of Göttingen, the historic city cemetery. Besides the centuries-old trees and grounds, there are some very familiar names on the historical graves, among them eight Nobel Prize winners. In addition, we keep finding names that will sound familiar to those who have studied science…

A Scientific Tour of the Göttingen Cemetery

Today, I would like to take you on a very special tour that traces some of the most important, brilliant minds of the early 20th century — a heyday for science in Göttingen. The most important achievements of these long-dead personalities are sometimes pointed out on their tombs at the Stadtfriedhof, the historic city cemetery in Göttingen. What is often overlooked by countless passers-by on the cemetery grounds is an “Aha!” experience for attentive observers. Let’s see if you can notice the clues as we go on our tour… 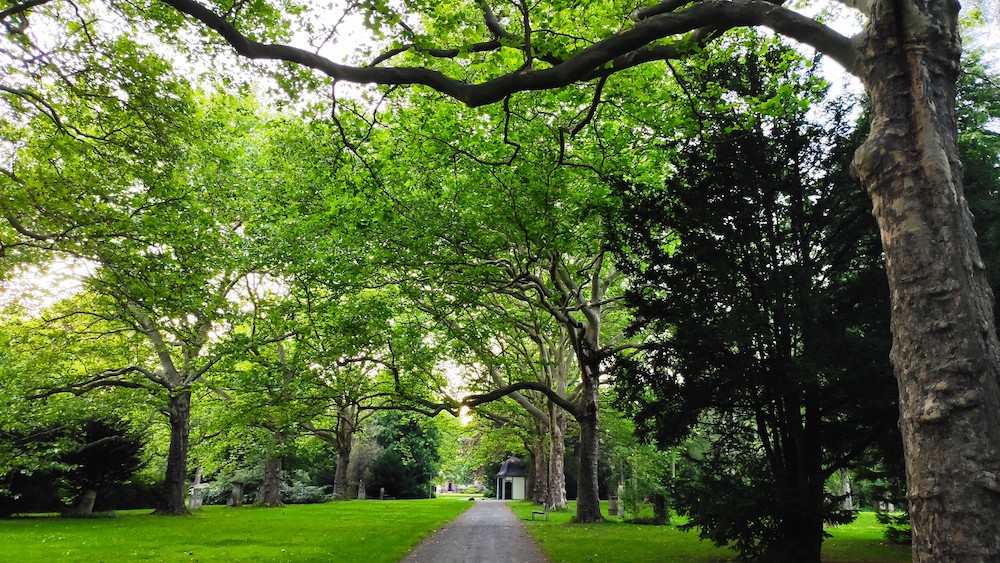 The historic city cemetery in Göttingen.

Let’s start our tour at the Nobel Roundel, which celebrates the eight Nobel Prize winners buried in the cemetery. The structure is located near a small pond and consists of an obelisk surrounded by stelae that are arranged in the shape of a seventeen-sided figure (a heptadecagon). 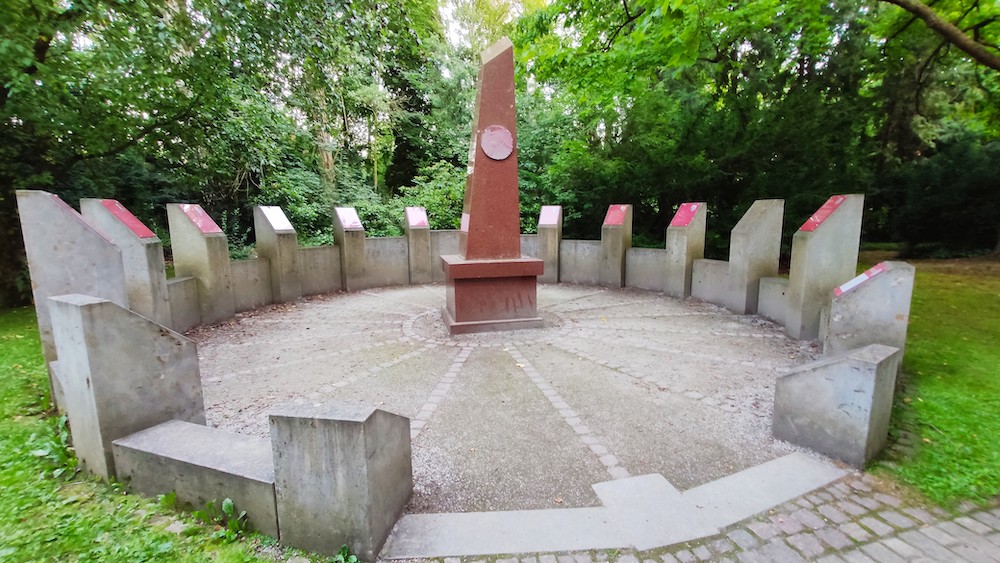 The Nobel Roundel, which includes notes and background information on the eight Nobel Prize winners buried there.

It is interesting to note that a heptadecagon can only be constructed using a compass and unmarked straightedge, but its constructability could not be proven for thousands of years. When Carl Friedrich Gauss was 19, he succeeded in doing so. (Gauss is buried in Göttingen, but in a different park.)

If we walk along the pond from the Nobel Roundel, we find the graves of Max von Laue and Walther Nernst, and a few meters further, there is the grave of Otto Hahn, who won the Nobel Prize for Chemistry. On closer inspection, Hahn’s simple tombstone is conspicuous by the fact that the formula of uranium fission is shown on the bottom. 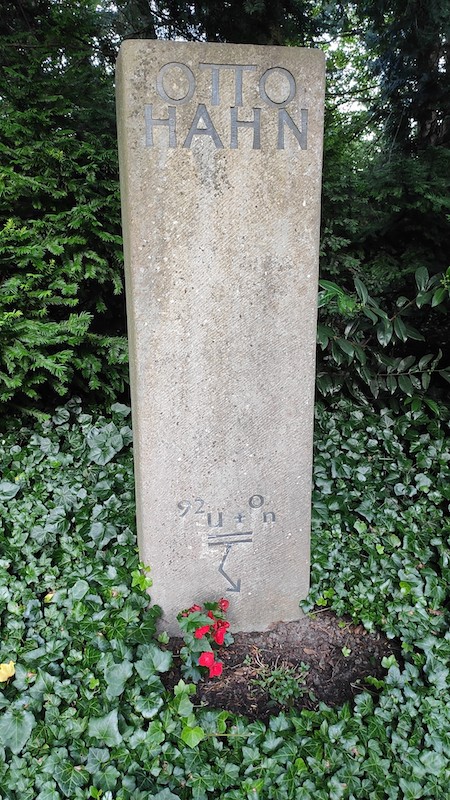 Tombstone from the grave of Otto Hahn with a short formula on the bottom.

The process described by that formula entails a uranium nucleus, which is bombarded with a neutron and then decays, releasing an incredible 173 MeV of energy, releasing further neutrons and allowing a chain reaction to take place. With this discovery, Hahn heralded the atomic age and it earned him the title “Father of Nuclear Fission” as well as the Nobel Prize. Later, after the dropping of the first atomic bombs, he was one of the sharpest critics of nuclear armament and was repeatedly nominated for the Nobel Peace Prize for his active pacifism.

It was not Otto Hahn alone who had discovered nuclear fission. His colleague Lise Meitner, who had been working with him for decades, made a significant contribution to this discovery by stimulating the corresponding experiments, providing theoretical support and finally interpreting them correctly. In the course of her scientific career, Meitner was nominated for a Nobel Prize no less than 48 times (including once by Hahn himself) and always went away empty-handed, although she certainly deserved this recognition due to her achievements. This circumstance is today considered one of the Academy’s greatest failures.

A few meters further on our tour is the burial place of the Nobel-Prize-winning physicist Max Planck. The simple stone is only inscribed with his name, and only after closer inspection do you see the expression h=6.62 \cdot 10^{-34} W \cdot s^2 at the very bottom, framed by ornaments. 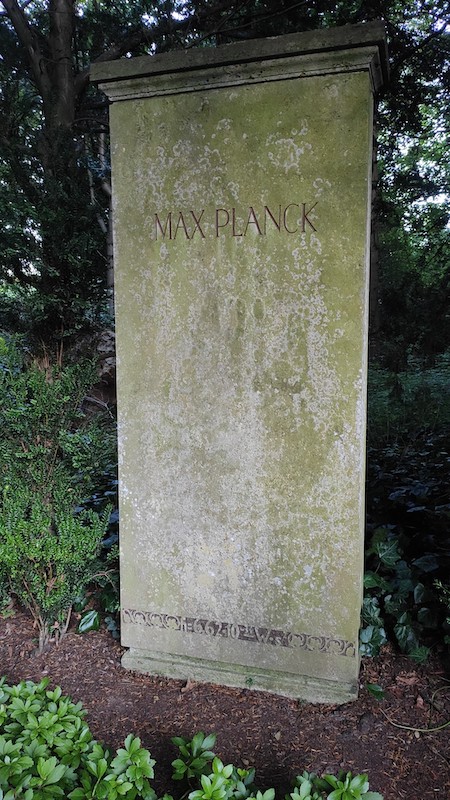 Tombstone from the grave of Max Planck, including the value of a quantity ℎ on the bottom.

h is Planck’s constant, a universal quantity, which, alongside the gravitational constant and the speed of light, is considered the third of the fundamental natural constants of physics. (It is such an elementarily important quantity that the small reference on the gravestone has always seemed incredibly modest to me, as if it weren’t the foundation for the developments of modern quantum physics.) Albert Einstein recognized the fundamental importance of Planck’s work early on and used it to explain the quantum properties of light in the photoelectric effect, thus also winning the Nobel Prize.

The letter h chosen by Planck simply means Hilfsgröße in German, which translates to “auxiliary quantity”. He introduced it to derive Planck’s law of radiation due to the result of his measurements. This exorbitant understatement shows that, at that time, the significance of his discovery could not have been nearly clear to him.

We find Planck’s constant again on the tombstone of Max Born and his wife Hedwig as part of the formula pq-qp = h/{2 \pi i}, with which Born expressed the noncommutativity of quantum mechanical quantities and from which Werner Heisenberg (a student of Born) derived the famous uncertainty principle. 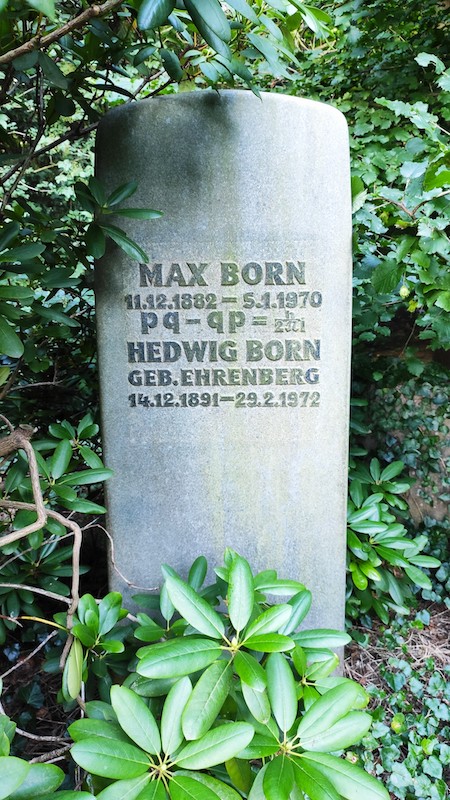 Tombstone from the grave of Max Born and his wife, including an equation.

Born not only introduced the concept of quantum mechanics but also made significant contributions to both the Heisenberg picture and the equivalent Schrödinger picture formulation. His interpretation of probability is the basis of the Copenhagen interpretation of Niels Bohr and Heisenberg, which has a huge influence on our modern scientific view of the world. Born’s contribution to quantum mechanics was honored late in 1954 with the Nobel Prize in Physics, 22 years after his student, Heisenberg.

In addition, there are other important scientific personalities among the students of Born. Among them are Robert Oppenheimer, the “father of the bomb” and head of the Manhattan Project, as well as Maria Goeppert Mayer, the discoverer of the nuclear shell structure and, after Marie Curie, the second woman to win a Nobel Prize in Physics.

Moving away from the Nobel Prize winners, there is a tomb that even the uninitiated immediately notice because of its peculiar shape: It consists of a tombstone crowned by a sphere decorated with stars. This tomb belongs to the grave of physicist and astronomer Karl Schwarzschild and his family. 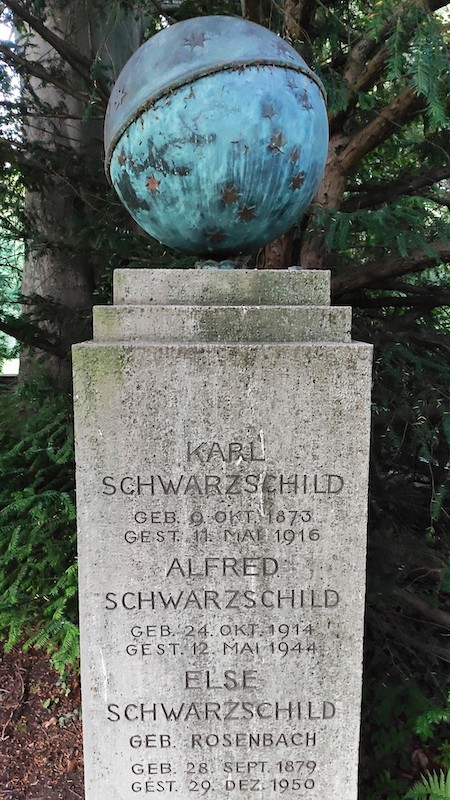 Tombstone from the grave of Karl Schwarzschild and his family, with a large starred sphere on the top.

Schwarzschild is regarded as the “inventor” of the black hole, and the story of this discovery sounds so incredible that Hollywood might have rejected it. He discovered the initially purely theoretical concept of black holes as part of his solution to the theory of general relativity less than two months after Einstein had formulated it. Six weeks later, he had already calculated the problem for real bodies. He did all of this on the side during his military service on the Russian front in World War I and died of an autoimmune disease a few weeks after his discoveries.

From his special solution of Einstein’s equations, Schwarzschild derived the radius to which an object would have to be compressed in order to become a black hole. For the Sun, this Schwarzschild radius is three kilometers, and the Earth would become a black hole if it were to compress to a radius of nine millimeters; i.e., to the size of a cashew nut.

Schwarzschild sent a letter with his discoveries to Einstein, who was amazed by the simplicity and elegance of the exact solutions of his equations. It included the words: “As you see, the war treated me kindly enough, in spite of the heavy gunfire, to allow me to get away from it all and take this walk in the land of your ideas.”

Every time I stand before the Schwarzschild tomb, I inevitably ask myself what brilliant achievements and progress this man would have been capable of in a healthy state and in peacetime, and why on earth he never received a Nobel Prize posthumously. (The Nobel Prize was awarded posthumously two times until 1974, when the statutes changed to disallow posthumous awards.)

The tomb of one of the most important mathematicians of modern times is also far from the tombs of the Nobel Prize winners and, like Planck’s and Hahn’s tombs, is very simple. Apart from his name, David Hilbert, there is only the inscription Wir müssen wissen/Wir werden wissen (“We must know/we will know”), the closing words of his famous radio speech in 1930, in which he expressed his unshakable belief that knowledge has no limits. 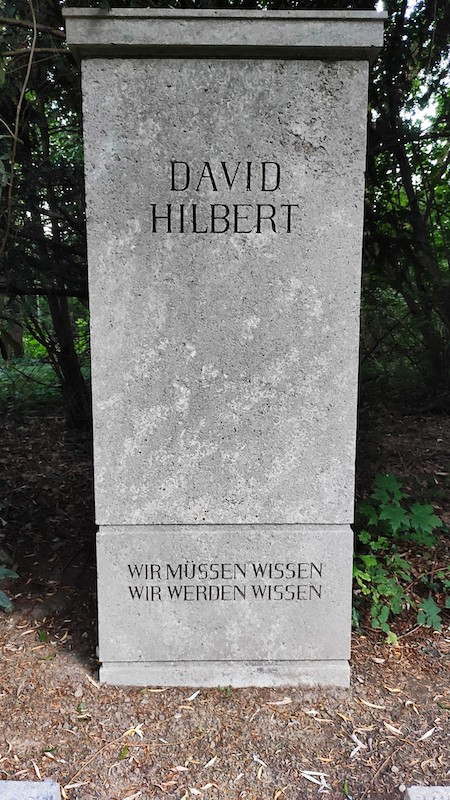 Tombstone from the grave of David Hilbert, including an inscription on the bottom.

Hilbert was always convinced that every mathematical problem must be solvable. At the end of the 19th century, cracks had appeared in the foundations of mathematics, because logical errors suddenly appeared in mathematical subareas previously considered to be clear and certain, leading to contradictions. Early on, Hilbert began to work on his vision of a strictly axiomatic (or, built on simple foundations) and tidy mathematics in order to build a new, solid foundation for mathematics. This included summarizing the 23 open mathematical problems that were most important from his point of view and presenting them at the second mathematical congress in Paris in 1900.

Interestingly enough, Hilbert set the future main topics and research focus of mathematics, since it was considered an honor to solve one of Hilbert’s problems. In this way, he had a lasting influence on the mathematical research of the 20th century.

Among other things, Hilbert’s own mathematical works set the mathematical foundations for the quantum mechanics that were later developed. I know of no other mathematician of modern times with such a comprehensive understanding of various mathematical fields and such a lasting influence on his subject and related sciences as physics, which, incidentally, in his view was “actually much too difficult for physicists.”

For David Hilbert, the exclusion of women in the sciences, which was unfortunately common practice in his time (and is only starting to improve), was incomprehensible. He supported talented female mathematicians and narrowly failed to help his doctoral student Emmy Noether, one of the founders of modern algebra, to obtain her own professorship. In connection with the discussions about Noether’s application for a postdoctoral lecture qualification, Hilbert said his much-cited statement: “A faculty is not a swimming pool!” This intended to suggest that gendered swimming pools (a common practice at the time) was okay, but made no sense at a university.

Commemorating a Lasting Impact on the Sciences

Even though this walk through science history puts my kids to sleep, I hope you find it interesting. There are many more scientific luminaries who were laid to rest at the Stadtfriedhof besides those mentioned here, and who deserve special recognition as well. Should you ever come to Göttingen, you might be able to start this tour yourself and make your own discoveries!

Modeling the Spread of COVID-19 with COMSOL Multiphysics®