A standing contact fatigue test is a procedure used for testing crack growth on the subsurface level. In such a test, a spherical object is pressed against the tested materials and cycled between a high and low compressive load. No translational movement between the two occurs.

In this example, fatigue is simulated using the Dang-Van model. The results show stresses that are a combination of the residual state from the hardening process and the structural response to the plastic deformation arising from the indentation of the spherical object. Plasticity occurs only during the first load cycle, while subsequent load cycles are elastic in nature. The second load cycle can therefore be seen as a stable load cycle and is used in the subsequent fatigue study. 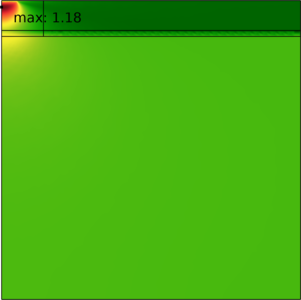