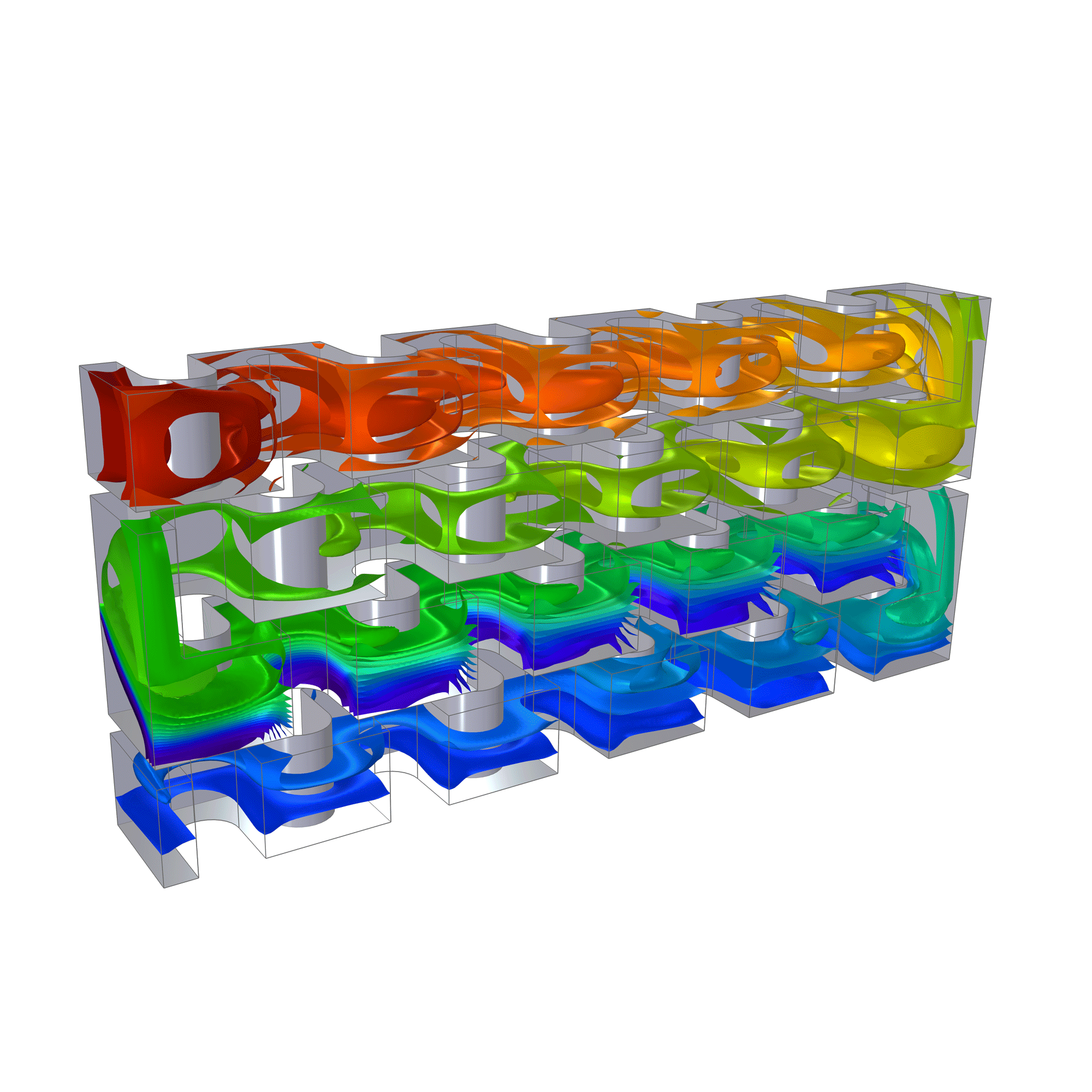 Mathematical models help scientists, developers, and engineers understand processes, phenomena, and designs of reacting systems. The Chemical Reaction Engineering Module, an add-on to the COMSOL Multiphysics® software platform, provides a user interface for creating, inspecting, and editing model equations, kinetic expressions, functions, and variables. After developing a validated model, it can be used for different operating conditions and studies, leading to new ideas as a result of the intuitive understanding of the relation between hypothesis and results. Solving the model equations over and over for different inputs leads to a true understanding of the studied system. Additionally, the Chemical Reaction Engineering Module, along with other tools in COMSOL Multiphysics®, is developed with optimization in mind, providing state-of-the-art mathematical and numerical methods adapted for chemical systems.

What You Can Model with the Chemical Reaction Engineering Module

When you expand the COMSOL Multiphysics® platform with the Chemical Reaction Engineering Module, you have access to features for modeling transport phenomena and chemical reactions in addition to the core functionality of the COMSOL® software.

Conversion and temperature distribution in a monolithic converter for NOx reduction for exhaust gas treatment in automotive applications.

Flow field streamlines and concentration in a laminar static mixer.

Composition as a function of time in a perfectly mixed batch reactor. The liquid mixture is typical for an ibuprofen reactor.

Overview of the Modeling Strategy and Workflow

Realistic descriptions of reacting systems in scientific and engineering studies often need to incorporate both transport phenomena and chemical reactions to understand and optimize a process or design. The Chemical Reaction Engineering Module is tailored for the typical workflow in chemistry and chemical engineering investigations, which involve the following incremental steps:

The workflow described above can be applied in many different fields that involve chemical reactions and in all scales, from nanotechnology and microreactors to environmental studies and geochemistry.

The module allows engineers, scientists, and designers to quickly and efficiently define models, solve the model equations, perform parameter analysis, and evaluate the results from simulation studies. In addition, the whole process, from model definition to the presentation of the results, is documented in the software for transparency and reproducibility.

A possible modeling approach for complex reaction mechanisms is to start with space-independent models and extend them to include transport phenomena. The space-dependent model shows a stirred tank reactor typically used in batch processes, for example, in the food and pharmaceutical industries.

The first step in performing simulations of chemical reaction engineering processes is to study the reaction mechanisms in perfectly mixed systems. The Reaction Engineering interface is the main tool for studying these systems before moving on to transport phenomena.

The first step in modeling any system is establishing the material balances. In COMSOL Multiphysics®, you can enter chemical equations and automatically obtain the material balance equations for the chemical species in the system and the energy balance equations for the system. When you type in the reaction mechanism, the kinetic expressions as a function of the species concentrations are derived automatically from the mass action law for elementary steps. You can also type in your own analytical expressions for the reaction rate as a function of the species concentrations and temperature.

The material balances and the reaction kinetic expressions give the ordinary differential equations that are formulated automatically by the software. For a perfectly mixed batch reactor, the solution to the equations gives the composition of the reacting mixture with time.

The Chemical Reaction Engineering Module also contains a thermodynamic properties database, which you can use to calculate properties for gas mixtures, liquid mixtures, gas-liquid systems at equilibrium (flash calculations), liquid-liquid systems, and gas-liquid-liquid systems at equilibrium. There is a variety of thermodynamic models that can be used to calculate density, heat capacity, enthalpy of formation, enthalpy of reaction, viscosity, thermal conductivity, binary diffusivity, activity, and fugacity.

The following thermodynamic models are available:

The thermodynamic properties database can be used to create a so-called property package for a specific reacting system by selecting the chemical species present in the system, the desired properties, and the thermodynamic model. This property package defines functions and equations for use in the model of the reacting system. Note that a property package defines functions that can be used for perfectly mixed and space-dependent systems. The Reaction Engineering and Chemistry interfaces allow for the automatic linking of functions and equations to the models for perfectly mixed systems and space-dependent systems, respectively.

When a Reaction Engineering or Chemistry interface is defined with reaction mechanisms and a set of reactants and products, these reactants and products can be matched with the chemical species in the property package defined by the thermodynamic properties database. This matching automatically links the functions and equations generated by the property package to the model of the reacting system.

For perfectly mixed systems, the combination of the Reaction Engineering interface and the property package allows you to define and solve the fully coupled equations that describe the material and energy balances. The results are the temperature and composition of the reacting system with time, with a given set of initial conditions and operating conditions.

The thermodynamic properties database can also be used to compute heat capacity, density, thermal conductivity, and viscosity for fluids in systems that do not involve chemical reactions. The properties of the mixture are highly dependent on temperature and composition. Note that all of the functionality described here makes up the Liquid & Gas Properties Module, which is included in the Chemical Reaction Engineering Module.

Temperature and flow distribution in the cooling system of a four-cylinder engine. The solution consists of water and glycol.

Studies of chemical reactions and reaction mechanisms usually rely on parameter estimation of frequency factors, activation energies, and other parameters that may quantitatively describe experimental observations. The Chemical Reaction Engineering Module can be combined with the Optimization Module in order to access a dedicated interface for chemical kinetics.

The typical workflow for the estimation of model parameters for a certain assumed reaction mechanism is as follows. You first select the model parameter to estimate, such as the rate constants, and enter initial values and scales for the parameters. Then, you can link to the file that contains the experimental data, matching up the data columns with the model variables. Once you have run the parameter estimation, you can compare the model results and the experimental measurements in postprocessing.

Experimental data compared to simulation results obtained with parameter estimation. This specific example investigates the kinetics of protein degradation in a biotechnology application.

Once you have a working model for a perfectly mixed system, you can use this model to automatically define material, energy, and momentum balances for space-dependent systems directly from the Reaction Engineering interface. This functionality allows you to define problems in 2D, 2D axisymmetry, and 3D for multicomponent transport, heat transfer, and fluid flow. The transport properties calculated in the Reaction Engineering interface (for example, heat capacity, thermal conductivity, viscosity, and binary diffusivity) are then automatically made available in the space-dependent transport interfaces.

A space-independent model (0D) can be used to automatically define the chemical species transport, heat transfer, and fluid flow equations from the chemical equations and thermodynamic properties.

The structure and nomenclature for the formulations used in the module for the material, energy, and momentum balances, coupled to the reaction kinetics, is taken from the textbook Transport Phenomena by Bird, Stewart, and Lightfoot. This makes the user interface familiar to chemical engineers in both industry and academic institutions.

Both the Transport of Concentrated Species and Transport of Diluted Species interfaces can include electric fields as driving forces for transport for the modeling of electrolytes and ions. The Nernst-Planck and Electrophoretic Transport interfaces are dedicated to the modeling of electrolytes and can include the formulations of Poisson’s equation or the electroneutrality condition for the charge balance in the electrolyte. Applications of this functionality include electrokinetic valves, electroosmotic flow, and electrophoresis.

The chemical species transport equations are also available for porous media, for example, to include Knudsen diffusion. The dusty gas diffusion model is also included in the software. The formulation of the mass balance model as well as the transport properties can be obtained directly from chemical equations using the Generate Space-Dependent Model functionality in the Reaction Engineering interface.

The fluid flow interfaces in the Chemical Reaction Engineering Module can handle laminar and porous media flow. In addition, the module has ready-made couplings for the modeling of chemical species transfer in turbulent flow, when combined with the CFD Module. The formulation of the fluid flow model as well as the viscosity and density can be obtained directly from chemical equations using the Generate Space-Dependent Model functionality in the Reaction Engineering interface.

Surface reactions are typical for heterogeneous catalysis as well as for surface deposition processes such as chemical vapor deposition. They are found in the bulk chemical industry, for example, in the Haber–Bosch process for the production of ammonia and in microsensors for the detection of very low amounts of tracers that can adsorb on surfaces and be detected by, for example, a change in electrical properties.

In transport-reaction models, surface reactions can be treated in two different ways:

The Reaction Engineering and Chemical interfaces can also deal with surface species and surface reactions in space-independent models for mechanistic studies and automatically export the kinetics to boundary expressions, as in the first option above, or as homogenized reactions in porous media, as in the second option above.

Hydrogen distribution in a tubular reactor modeled with flow in porous media and multicomponent transport and reactions.

Concentration distribution of a reactant in turbulent reacting flow in a multijet reactor depicted as isosurfaces. The desired reaction in this case is a condensation polymerization reaction used in, for example, the manufacturing of nylon. Condensation polymers have the advantage of being biodegradable.

It is possible to model surface reactions coupled to transport and reactions in a bulk in a detailed geometry (upper-left corner), as a homogeneous porous particle (upper-right corner), and as a homogenized bed with dual porosity (bottom right).

You can build user interfaces on top of any existing model using the Application Builder, included in COMSOL Multiphysics®. This tool enables you to create applications for very specific purposes with well-defined inputs and outputs. Applications can be used for many different purposes:

Once you have built an application in COMSOL Multiphysics®, you can make it available to your colleagues and customers with either the COMSOL Compiler™ or COMSOL Server™ products.

This simulation app allows the user to calculate the equilibrium compositions in a gas phase conversion of ethylene to ethanol, and study how the initial conditions and the operating conditions affect the ethanol production.